We had good-sized audiences at each show, and comments I have heard have been extremely positive, which is very pleasing. It’s always hard for me to judge how a show has gone – by the time it’s being performed, I am way too close to it – over-aware, perhaps, of its flaws and over-pleased, perhaps, with its strengths and high points.

I do know, however, that on this occasion, I was as confident as I have ever been in what I saw happening on stage at the Saturday matinee (the only one of the four shows I watched all through). Cast and crew were working together beautifully, and every single person seemed to me to be performing at the top of their game. I was really proud of them – and not a little emotional!

And now here we are three days later: props have been returned, costumes will be collected Saturday, photos have been uploaded and shared and “normal” life has resumed. Images of The Crucible still flash often into my mind, however – like some of these from the dress rehearsal. 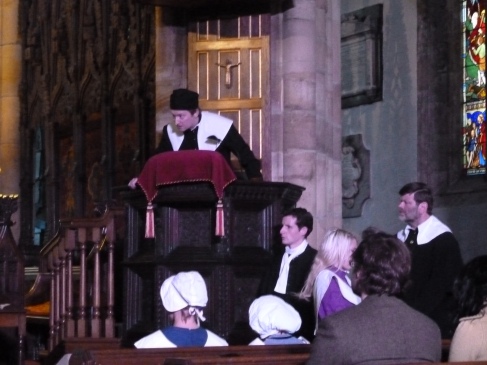 And this one of the whole cast and crew after the final show:

So, has my love-affair with The Crucible ended? On balance, I think not. I have a feeling I’ll want to revisit it sometime. To play with it again. But not for a long time. Now other projects beckon – some involving some of the fantastic people I have worked with on this show.