The last few weeks have been all kinds of fun, not least because of Fun Palaces. In case you missed it, see here for all details about this fantastic initiative: http://www.funpalaces.co.uk. It happened for the first time last weekend and I was part of the organising group (nothing so formal as a committee!) for Lancaster’s Fun Palace, which was held in Lancaster Library. The photos below will give some sense of the event, which, though relatively small in many ways – certainly compared to many of the Fun Palaces taking place nationally – seemed to be really enjoyed by all who took part as organisers/event co-ordinators/participants; as the “/” hopefully suggests, the lines between roles were often delightfully blurred. 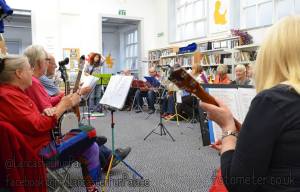 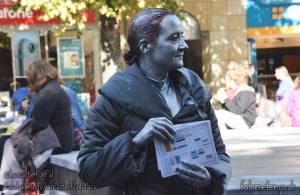 The great photos above were taken by the talented @fotometer_uk.

And here is a small taste of the fabulous Sue Parish ukulele orchestra in action. For me, almost more than anything else, they encapsulated Fun Palaces – such a wonderful mix of people of all ages having fun performing, watching and, later, having a go in the workshop section:

Sad you missed it? Don’t worry – Fun Palaces will be back in Lancaster and elsewhere next year. Save the date -first weekend of October; look out for taster events throughout the year; join in the conversation and be part of it – we’re on Facebook and twitter (@lancasterfunpal @funpalaces). We’d love input from anyone about anything!

So, that was Fun Palaces. For Now.

But there’s still fun coming up. I’m waiting for a licence before I can start my next ELART show (news as soon as…) but The Rose Company has been active post-summer. We filmed Iphigenia a couple of weeks ago – an exhausting, but hugely fun time. Editing has still to be done, but it seemed to go well…

And, most pressingly in mind at the moment, on the 19th of October The Rose Company is going to be performing a very short two-actor excerpt from our “I Have A Speech Of Fire” show, a show that we performed at Lancaster Castle in March. We’ve been picked to be part of an evening of Shakespeare and Gender, hosted by Smooth Faced Gentlemen (a fab all-female Shakespearian company) at The Pleasance Theatre, Islington. We are thrilled to have been chosen (filming our audition piece on the canal towpath was “fun” to say the least – Ruth’s later hashtag #interruptedbybikes being entirely apt) and we are looking forward to performing, seeing the work of other companies and meeting some great people. We’ll be rehearsing next week and I can’t wait. Looking forward to revisiting and refining Richard…